Scotch malt whisky is distilled typically twice in copper pot stills. The first distillation is carried out in a wash still, usually slightly bigger than the spirit still used in the second run. Copper is used because of its good malleability and heat conduction but also for its catalytic properties and the ability to neutralize some of the sulphur compounds and off-notes. The stills can be heated either directly by burning gas, peat or coal or indirectly by steam coils running inside the still. If direct firing is used, there must be a rummager on the bottom of the still to prevent charring, at least in the wash still. The stills usually have a broad pot and a narrowing swan neck that turns to a lyne arm leading to a condenser, which can be a traditional worm, a shell&tube condenser or a plate heat exchanger. Various shapes of stills are used and it is believed that the bulbs and boiling balls etc increase the copper contact at the right spots to produce better spirit. Some distillers use a purifier in the spirit still, which is a pipe reversing some distillate from the lyne arm back to the swan neck producing more reflux.


Basically the first distillation is a simple distillation of volatile compounds (such as alcohols), producing low wines of 20-25% abv from 6-9% abv wort. Wash is usually preheated to prevent excessive temperature differences and charring inside the still. The first distillation is usually deemed complete when the distillate is under 1% abv and about one third of the wort has boiled over to the wash safe. Wash distillation usually takes 5-8 hours to complete, depending on the size, shape, temperature and charge of the still. The residual is called pot ale.

The foreshots consist of the most volatile compounds, such as methanol, acetaldehyde (ethanal), some of the ethyl esters such as ethyl acetate and volatile sulphur compounds (see table of boiling points below). Along with them come some of the residues of the previous distillation, which are not high volatiles but soluble only in higher strenghts of alcohol, for example fatty acids and their esters. These compounds are therefore condensed into the still at the end of previous distillation and as the next distillation starts, they are made soluble again by the high alcohol strenght and swept up to the spirit safe along with the foreshots. The foreshots are either unpleasant in flavour or dangerous to health (or both) and therefore not included in the final spirit but returned to the next distillation. The long-chain fatty acids and other residues from the previous distillation tend to form a cloudy mixture when diluted to 80 sikes proof (45.7% abv).


The traditional way of making the first cut point is by mixing the foreshots with water in the spirit safe; as the spirit turns clear, the foreshots have mostly passed and the middle cut is collected into the spirit receiver. Some producers use timed foreshot runs and do not bother with the demisting test and therefore are are likely to cut the spirit a bit lower as a precaution and probably getting less of the highly volatile compounds into the spirit. The second cut can be determined by taste, abv or time according to the distillery practice. The feints are then run usually down to 1% abv and added to the next wash.

The feints are the last volatile fraction of spirit distillation. Feinty aromas increase slowly towards the end of distillation, developing from quite pleasant mushroom, cereal and popcorn aromas to leathery tobacco notes and further to ashy, fishy and even cheesy aromas not usually approved in whisky. The feints are usually rich in phenols and smoky aromas important for peaty whiskies. Therefore the second cut point must be determined with care to produce peated but not feinty spirit with off-notes. The feints are usually run quite fast to save time, but this makes some of the fat-solubles to adhere to the still. These compounds (mostly fatty acids) must be purged by an adequately long and slow run of foreshots in the next distillation, otherwise the whisky might become feinty no matter how early the second cut is made.

The spirit cut is usually about 72-65%, but there are considerable differences between distillers. To produce a very light aetheral whisky (richer in high volatiles) the distiller would be likely to use a tall still with a low charge run slowly in low temperatures for maximum reflux, a purifier, an ascending lyne arm, a purifier and a shell&tube condenser for maximum copper contact and cut short foreshots and long feints (earlier second cut) for maximum amount of high volatiles and less of the heavier aromas. To produce a peaty whisky the distiller must try to catch all the phenols from the latter part of the middle cut but also avoid excess feints.

The distillation is not only a simple process of separation, but the heat and the copper contact alter some of the flavour compounds, too.  Heat promotes Maillard reactions producing furfural and sulphur compounds, especially thiophenes and polysulphides, which at low concentrations add a pleasant roasted and complex flavour, but produce pungent and unpleasant cereal and sulphury notes at high concentrations. Heat also promotes aldehyde reduction to alcohols and acids and their conversion further to esters. Lignin-derived components such as coumaric and ferulic acids can evolve to more spicy guiaicols. Acrolein (peppery) can form from bacterial fermentation products in presence heat. Fusel oils, 2-phenethanol (rose, flower) and furfurals (caramel, burnt sugar) are formed in pot-stills, but not significantly in column still distillations and therefore are likely to be generated by heat differences during distillation.

Copper removes most of the sulphury, cereal, feinty and meaty aromas during distillation. Especially the copper contact of the first wash still distillation is important. Total removal of copper contact in the spirit still has surprisingly minimal effect on the mentioned off-notes.

A medical view on maturation of whisky

A fresh medical view on the maturation issue and a shameless rip-off from The Lancet.  Just in case someone does not know The Lancet, it is a highly respected English medical journal, established in 1823 and still one of the big three among the medical journals. Below are two articles first published on 11.1.1902 and 19.3.1904 discussing the definition and consumption of whisky.

Some interesting points are made concerning for example malt and grain whiskies
"There is a marked difference between the physiological action of spirits derived from different sources...The potentialities of these substances for good or evil depend upon the materials from which the spirit is produced."
and the quality of blended whiskies
"...age is essential in order to reduce spirits to state fit for consumption...Even genuine malt whisky must be matured, whereas grain spirit...featureless as regards flavour...age can have no advantegeous change [on grain spirit]."
and wine finishes
"Grain whisky... either has to be flavoured by adding a small proportion of full-flavoured malt whisky, or...storing it in sherry casks in which malt whisky has been ripened"
and the disappearing age-statements
"It seems to us that it avails nothing to the consumer to be sure of getting all-malt spirit when he asks for it if he cannot at the same time receive some guarantee also as to its age."
and the rise of NAS-whiskies
"The whole object of the Bill would be destroyed if...it were possible to supply true malt whisky so immature as to be injurious to health."
and the decline of properly aged quality single malts
"The detractors of all-malt whisky might be expected for their own purposes to supply...pure malt whisky...which though genuine could lay no claim to...age."
All this a bit over hundred years ago. Tradition? 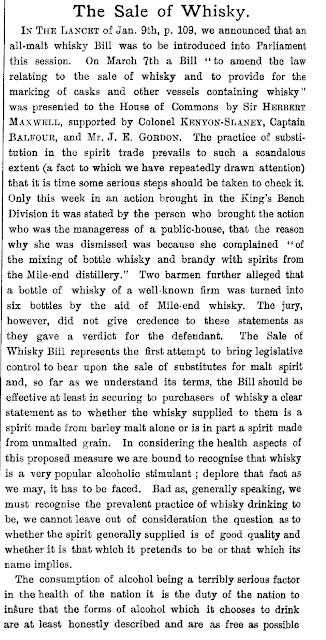 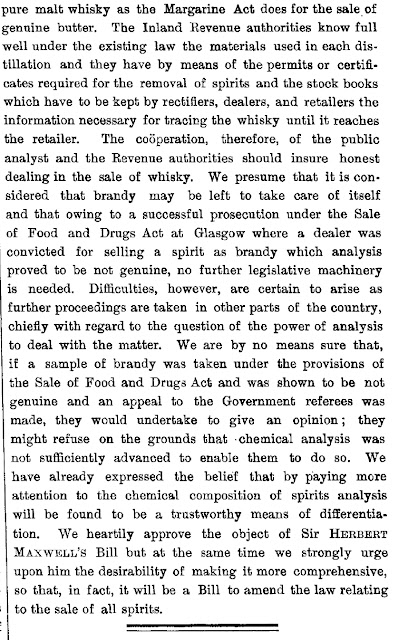 Email ThisBlogThis!Share to TwitterShare to FacebookShare to Pinterest
Tunnisteet: history

Scotch whiskies are predominantly matured in ex-bourbon casks. The previous filling with bourbon extracts much of the flavours, but there is still a lot left for the refills, too. The water-soluble extracts seem to exhaust faster than the lignin-derivatives or the lipid-solubles, although the filling strenght does influence extraction rates. For example oaklactones and soluble oaktannins, especially ellagitannins are largely depleted during the bourbon fill and the first Scotch fill. By extending the maturation period it is possible to create whiskies with considarable oak flavours, although the proportions of flavour compounds tend to differ from the first fill maturations (see table 1 below).

Lignin does break down in presence of alcohols, but most of the linkages are resistant to ethanol. Therefore lignin does not degrade completely even in the presence of high filling strenghts during long maturation, but the release of monoligninderivatives tends to slow down considerably leading to an exhausted cask. The relative absence of guaiacol ja syringyl compounds is thought to be a good marker for cask exhaustion. The guaiacol concentrations are probably quite similar to those of ferulic acid concentrations shown in table 1 and the amount of syringic acid is likely to represent the amount of total syringyl compounds (for information on lignin construction see previous blog 15.2.2011).

Exhausted casks can be rejuvenated by scraping the inside of the cask, removing the used wood and bringing new wood in contact with the spirit. Untoasted wood however gives green and raw aromas and scraped casks are usually toasted or charred again. Recharring might impart too much colour and change the aromas towards bourbon-style whiskies and therefore retoasting in apparently preferred in Scottish cooperages. Regenerated recharred casks differ considerably from ex-bourbon casks used for the first fillings with Scotch. In table 2 are presented the sensory profiles of 3 year old grain whiskies matured in refill bourbon casks compared to decharred recharred exhausted ex-bourbon casks. The recharred casks seem to produce more sweet and woody notes as refill casks tend to bring out the drier woody notes. In terms of flavour compounds the recharring promotes fast lignin breakdown and caramellisation of hemicellulose thus extracting considerably more guaiacols, isoeugenol and vanillin commonly associated with new wood barrels. Surpisingly the concentrations of oaklactones are only slightly greater in recharred casks compared to refills. Perhaps oaklactones are already extracted from the deeper layers of the wood exceeding the scraping depth in rejuvenation and the recharring affects primarily wood layers that are already poor in oaklactones. Another possible explanation is the lack of seasoning of rejuvenated casks after the scraping which might lead more green wood notes and less oaklactones. A recharred cask with more guaiacol and vanilla extractives is more likely to promote smoky and sweet flavours of the spirit than a refill cask, although the sweet notes differ from those of the first fills as they are probably caused more by caramellisation products and vanilla than oaklactones. The charred layer is likely to remove some of the off-flavours, especially some sulphury aromas, but as seen in table 2 toasting also considerably reduces suphury aromas, so the filtration by active carbon layer might not be the only explanation for this.

A common practice during the 20th century was to season the rejuvenated casks as well as some of the new casks with pajarete to create a sherry-cask profile. The first intentional wine-treatments were made in 1880s and the last larger scale treatments in the whisky industry were terminated prbably during the 1980s.
A recent develepment has been a treatment of exhausted casks with salt catalyst before recharring or retoasting; this "curing" increases the extraction from rejuvenated casks (tables 2&3 below). The salt solution probably increases the heat influence in deeper layers of wood especially during medium heating (toasting). It is also likely that salt increases the solubility of extractives into spirit, although the precise mechanism is not yet described.

Rejuvenated casks are not particulary appreciated by malt whisky aficionados, but they probably are of good use in maturing young grain whiskies as they remove effectively some of the common off-notes associated with new make spirits. Also lighter style malt whiskies might benefit from a subtler cask influence lacking especially the overly sweet oaky notes.