Bengt Thorbjörnson (1891-1975) was a Swedish chemical engineer. After graduating from Kungliga Tekniska Högskolan of Stockholm he worked in sulphite factory in Bergvik (1916-1917), which manufactured sulphite spirits as a side product from 1911 at least until 1917. In 1917 he moved to Kramfors to work in a cellulose factory (1917-24) also producing industrial spirits as a side product. After a short spell at a margarin factory in Kalmar (1924-26) and a visit to Nashwalk Pulp & Paper Co in USA (1924-1925) he was appointed as the chief chemical engineer for Vin & Sprit AB (Wine & Spirit). He continued to work for the biggest Swedish alcohol producer for 30 years until 1957.


Thorbjörnson toured Scottish whisky retailers and distillers in 1929-1930. The main object was to investigate whether it was profitable to start whisky production in Sweden. After the tour the Finnish alcohol monopoly consulted Thorbjörnson on the same subject and the record of the Scottish tour is still available in Swedish from the Kansallisarkisto (The National Archive) of Helsinki. Thorbjörnson visited the warehouses of W.H. Chaplin, John Walker & Son and The Distillers Company, as  well as the distilleries in Caledonian, Mortlach, Cardow (Cardhu), Glen-Mhor, Glen Albyn and Adelphi.

He preferred the Highland malts and considered the Campbeltown malts were "lacking midtaste". The factors most affecting the flavour of whisky according to his studies were: 1) Water, which should be low in calcium. The water of River Spey was good as it ran through soil rich in granite and sand. 2) Climate, which should be quite cold but even to allow long stable distilling times. 3) Amount of peat used in drying the malt. 4) Bacteriae flora, as the local bacteriae influenced the quality of the brew. 5) Experience of staff.

The first place to visit was the wine and spirit retailer W.H.Chaplin & Co in London, who were at the time the sole representatives of the popular Long John brand. Their warehouse at Tower Hill consisted of 10 floors, of which 3 were underground. Huge glazed concrete cisterns (136 000 l) were used to vat and cold-chill-filter port wine. The whisky was vatted on demand in smaller concrete vats of size about 22 000 litres from different casks and different distilleries. According to other sources, Ben Nevis was the leading malt for Long John. 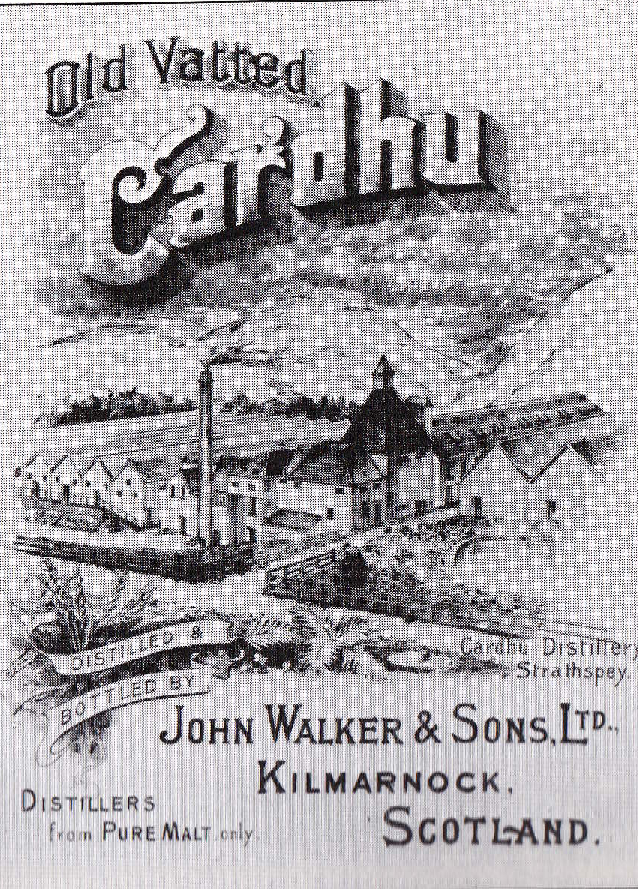 At John Walker & Son Thorbjörnson was hosted by the manager Sir Alexander Walker. At the time their Johnnie Walker blend was the most sold whisky brand in the world. Only sherry casks were used at the time. About 20% of them were new casks seasoned with sherry and the rest were refill casks rejuvenated with a small amount (about 35 litres) of sweet dark sherry for six weeks during which they were turned regularly. After the sherry-seasoning they are treated with pressure to impregnate more sherry into the wood. The sherry in the cask was then poured off and used several times for other casks. The pressure treatment had been developed by WP Lowrie in late 19th century and at the time of Thorbjörnson's visit it was used by many other blenders and distilleries as well. The Walkers had recently shifted to mainly hogshead size casks to ensure even quality. At the present time the Johnnie Walker recipe consisted of 10 parts Highland malt (Mortlach, Benrinnes, Ord, Cardow, Glenlossie, Dailuaine, Aultmore, Coleburn or Clynelish), 2 parts of Islay malt (Talisker (classified as Islay!), Caol Ila or Lagavulin) and 2 parts of Lowland malt (Rosebank or Glenkinchie). The blended malt was then again blended with grain whisky (mostly Caledonian) and the malt content varied between 40-60%. Long John blend consisted of 65% grain, 15% Lowland malt, 15% Highland malt and 5% Islay malts.


Caledonian grain distillery produced 40 000 gallons per week, which equalled 9 000 000 litres 50% abv- spirit per year. Maize was the most common cereal, but wheat and barley were sometimes used, too. About 30% of the mash came from barley malt dried over coal fire to gain diastase power. The maize flour was pressure cooked to prevent bacterial contamination. Brewers' yeast from Edinburgh was used to ferment in covered washbacks of 225 000 litres capacity (Cardow used pressed yeast). Carbon dioxide was collected and sold to mineral water producers. Column distillation with 20 plates in the analyser and 40 plates in the rectifier was used to produce new make spirit of 67 degrees over proof (95,3% ABV). The spirit was cut with water to 11 over proof (63,4% abv) for maturation. Draff was given for free to farmers. At the Adelphi grain distillery weekly production was 36 000 gallons/week and the only significant differences were the cooking of maize (not pressurised in Adelphi) and the fermentation time (72h in Adelphi, 96h in Caledonian). About 125 men were employed in each.

Mortlach produced high quality Highland malt with "quite old-fashioned means". A total of 24 men were employed to produce 8 000 gallons per week. Production was bigger than at the Invergordon distilleries, as Glen-Mhor and Glen Albyn managed only 2 500-3 000 gallons per week each. Distillation was carried out from September to end of May and the spring production was considered to be of the best quality. Mostly foreign barley was used and floor malted on site. Two kilns were used to dry malt for 50 hours in up to 77C after 9 days of germination. About 18 kg peat for every 120 kg of coal was used in kilning. Fermentation time in seven 60 000 gallon washbacks varied between 46-56 hours. After each fermentation the washbacks were washed with lime and peat was burned on the bottom of the washback to avoid bacterial contamination. The spirit was double distilled (no mention of the Wee Witchie or even partial triple distillation) to a very high proof of 45 over proof (82,8% abv) and reduced to standard 63,4% before maturation. Rummagers for wash still and direct firing with coal for both stills were used.

Thorbjörnson calculated that the blending and maturation was cheaper in big English warehouses compared to the Swedish Reymersholm or Slottet warehouses. He also thought that the flavours came mostly from the malt whiskies and therefore the malt content of the Swedish blends (Crown Blend and Black Label) should be increased. On the other hand Scotch grain whisky could be replaced with cheaper domestic neutral potato spirit to cut costs. He also made a a costs-analysis for building a Swedish malt distillery with a 500 000 litres capacity per 6 months, which apparently never came to be.