Scottish whisky distilleries accommodate a variety of different pot stills. Volumes vary from the 30963 litre wash still of Glenkinchie to the 2179 litre spirit still of Edradour (artisanal sma' stills excluded) and height from a couple of metres to the 8m tall Glenmorangie stills. Most are roughly onion shaped, but there are significant differences from the tear-shaped Bunnahabhain and Lagavulin to the slender Glenmorangie and Bruichladdich stills. Many stills have a wide bottom and a constricted neck, while several have a bulbous boil ball (aka reflux ball, Milton/Balvenie ball or bulge) in the middle section. Overall, the Scots are quite traditional with their stills, but occasional purifiers, still-neck coolers and a variety of condensers are still used. Most have converted to steam coil heating, while some still apply direct fire to the stills. In the history there has been a greater variety of stills, sadly more often to avoid taxation or speed up the distillation than to improve the distillate. In the 20th century the influence of North American distilling companies brought some interesting experiments with the reflux or Lomond stills, but the traditional pot still prevails in Scotland.
Early distilling stills were usually quite small and direct-fired. There was not much of a commercial distilling until the 17th century. From 1644 the spirits in the United Kingdom were taxed by the gallon of proof spirit and the taxation did not really affect the distillation methods. Anyway, most distillers did not pay the taxes, as many distillers were just farmers saving the surplus grain for the winter as a spirit. In 1725 the malt tax was raised in Scotland to the English level. This caused riots and decreases in ale drinking, leading people to consume illegal spirits instead. In 1780 wine was taxed heavily and again the illegal distillers gained customers. A year later all private distilling was made illegal, though not to much effect in the Highlands. The use of mostly illicit stills affected the size of the stills used from the 18th century in the Highlands. They should be easy to transport or hide, so increasingly smaller stills were used as the Excise control became stricter in the late 18th century.
Due to rapid increase in illicit distilling, the crown allowed to licence over 20 gallon (91 litres) stills in the Highland area in 1784. As this did not have much effect, the limit was raised to 40 gallons (182 l) and all spirit exports from the Highlands were prohibited to England in 1785. At the same time the spirit duty was calculated according to the size of the still and the stills were assumed to be used seven times a week. This led to the use of very shallow 'Millar' pan stills from the 1790's, especially in the Lowlands, where the Excise surveillance was effective at least to some extent. The Lowland still was claimed to operate in 3 minutes, providing significant tax benefits, but extremely coarse spirits. The pan still was wide and shallow, usually just a few inches inches deep and usually just about over the minimum legal capacity. Additional upwards expanding coils or pipes were introduced into the still to maximize the evaporation at the bottom and condensation at the top.

Lowland still sure was fast, but offered minimal reflux, copper contact and virtually no chance to cut the spirit correctly. So the coarse Lowland spirit often had to be rectified, ie redistilled or spiced heavily. Since the crown could not catch most of the illegal distillers and lost huge revenues because of the legal Millar stills, they decided to prohibit all stills under 2000 gallons (9092 l) in 1814. This effectively stopped pan distilling in the Lowlands, improving the quality, but put legal quality Highland distilling under ground until 1823, when taxation was eased considerably. In fact the over 40 gallons stills were legalized in 1816, but this had not much effect on the Highland stills or their desire to go legal.

Another major improvement in efficiency was the use of steam, first directly on the pot or via a steam jacket, but later by indirect heating by steam coils. Direct steam heating for distillation was first implemented by dye manufacturers in the late 18th century with good heat economy. The first distillery to use direct steam heating of wash was English Mesly distillery in 1801. Indirect heating by steam jacket was used in Irish Roscea distillery in 1818, but the Excise Board rejected it because of difficulties in estimating the still capacity. The Coffey stills were heated by steam, but the pot stills were mostly direct-fired up to the mid 20th century. It was until 1887 Glenmorangie was the first Scottish distillery to use steam heating. Auchentoshan had steam jacketed heaters from early 1900s, but the majority of distilleries converted to indirect steam as late as the 1950-60s. In continental Europe and Scandinavia the steam heating became more widely used, especially after Savalle's invention of steam regulator in 1857.
There are still Scottish distilleries using direct-fired stills; Glenfiddich, Glenfarclas and Macallan use direct-firing for both wash and spirit stills, while Springbank, Glen Garioch and Tobermory use direct-fired wash stills. Direct firing provides more temperature fluctuation both in the still and the contents. High temperatures can lead to burning and excess formation of furfural (nutty,burnt) or sulphurous and vegetal notes, especially if there is lots of sediment (dead yeast, grains) in the wash. To prevent this burning, direct heated wash stills have been installed with rummagers, ie rotating chains to keep the solids moving at the bottom of the stills. 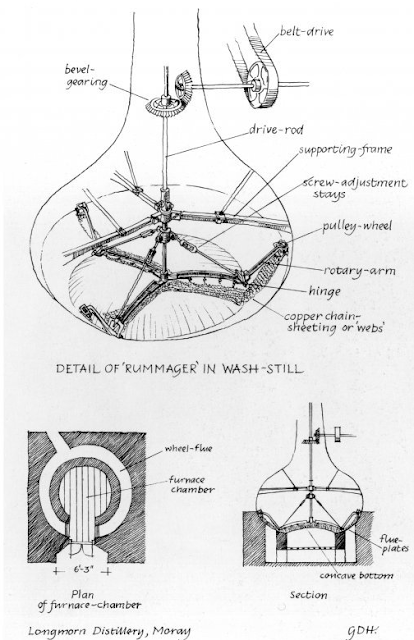 Early 19th century was the golden era for still experiments. The still heads were adjusted in many ways; there were soap trays and stirrers to minimize frothing, steam coats to enable more even distillation and most importantly several means to enhance the reflux with boil balls, cooling condensers, refridgerators, trays and series of boiling chambers, which probably eventually led to the birth of the continuous stills by Adam, Fournier, Blumenthal, Stein and Coffey.
A common way to increase reflux was to shape the stills so that the rising vapours were cooled or exposed to lower pressure and copper. This was easily done by adding bulbs or balls in the still head. They were and are still common in the Speyside. Boil balls could be one reason for the perceived fruity and light "Speyside"-style of spirit, since they probably increase copper contact, reflux and ester formation, while decreasing the heavy oily and sulphury notes.

Water cooling of the still head was probably first tested in late 18th century, the first patent is by Pontiflex from 1798, but the first Scottish distilleries to commercially cool their still heads were Hazelburn (1837), Dalmore (1839), (Ben) Nevis (1878), Fettercairn (1890) and Littlemill (1931). They used different methods for this, as Hazelburn had basically a tube condenser installed at the top of the still, where the spirit passed through pipes, which were cooled by water circulating in the condenser unit. Dalmore simply had a water jacket around the still head. Nevis, an extension of the Ben Nevis distillery, probably used a water jacket similar to the one in Dalmore, although there have been (unconfirmed) claims of a Lomond style cooled plate systems inside of the still. Littlemill had an early version of the Lomond still combined with water jacket coolers outside the still.

Intermediate condensing vessels between the still head and the worm were proposed already in 1736 by John Payne. The distilled wash or spirit is condensed inside a water jacketed purifier situated in the swan neck of the still and the heavier stuff is returned into the pot making the spirit lighter and higher in alcohol. Cooled intermediate condensers (water cooled purifiers) are still used at Glen Grant, Glen Spey and Strathmill distilleries.
Uncooled purifiers (basically a pipe descending from the lyne arm back to the still) are used in Ardbeg, Glenlossie and Talisker.

After the distillate leaves the still and there is no turning back via reflux or purifier, the spirit must be cooled. The traditional cooling method is a worm tub, consisting of a pipe wound into a spiral and immersed into a cold water tub. German chemist Christian Ehrenfried Weigel invented a worm tub in which the the cooling water was circulated to keep it cold (the Liebig condenser). The tube condenser with multiple straight copper pipes inside a cooled shell instead of a single coiled one in a tub was invented in 1825 by William Grimble. The shell and tube condenser provides more copper contact and is much more durable. A dozen Scottish distilleries still use worm tubs.


The Lomond still is a pot still with several horizontal (often perforated) plates inside the still neck. They became more popular in the Northern America and several bourbon and Canadian whisky distillers continue to use reflux stills, as they are often called over there.
The first commercial reflux still in Scotland was installed in Littlemill distillery in the early 1930s. American Duncan Thomas bought the distillery and apparently tried to produce light bodied Lowland whisky by two distillations with the reflux column and water jacketed cooler on the spirit still, instead of the traditional triple distillation previously used at the distillery. The double distillation with reflux column pot still was used at Littlemill until its closure in 1994. A similar experimentation was conducted in the 1950s by the Canadian company Hiram Walker & Sons. Their agenda was to produce a variety of different malt whiskies for blending purposes. To increase the control of the distillation reflux they used rotating rectifier plates, which could be turned to vertical or horizontal position for less or more reflux. The first such still was installed at Inverleven malt distillery situated inside the grain distillery Dumbarton in 1956. The resulting spirit was called Lomond whisky, hence the name Lomond still used later to describe all the Scottish reflux still whiskies. The experiment was successful, and the Canadians went on to install Lomond stills at Glenburgie (to produce Glencraig), Miltonduff (to produce Mosstowie) and Scapa. Scapa was different from the others, as it used a Lomond still in the wash distillation to render the spirit "sweeter and cleaner".
Littlemill distillery owner Duncan Thomas founded the Loch Lomond distillery in 1966 with the American company Barton distillers to produce a yet wider variety of spirits (7) by altering the settings of the rectifier plates, but also the length and angle of the lyne arm by a peculiar turning telescope lyne arm. These adjustable lyne arms were also installed in Mosstowie and Glencraig later on.

The Scapa reflux wash still experiment was discontinued in 1971. The official reason for removing the rectifier plates was that the tube and shell condensers made the wash still plates futile. That sounds odd since the tube and shell condensers had been used for a century by then. The Lomond stills in Miltonduff and Glenburgie were mothballed in 1981, as the surplus of whisky resulted in rationalisation of the business and eventually forced Hiram Walker to sell out all their Scottish distilleries in the mid 1980s. Littlemill was mothballed in 1994 and destroyed in a fire in 2004. Duncan Thomas and Bartons sold Loch Lomond in 1971 to a private company, which keeps the reflux still distilling alive in Scotland.

REFERENCES AND FURTHER READING:
Barnard A. The whisky distilleries of the United Kingdom. Birlin ltd 1887
Forbes, RJ. Short history of the art of distillation. Brill 1948

Hume JR, Moss MS. The Making of Scotch Whisky
Morewood S. A philosophical and statistical history of the inventions and customs of ancient and modern nations in the manufacture and use of inebriating liquors. Longman 1838.
Nettleton, W. The manufacture of spirits. London 1893
Reaich, D. Influence of copper on malt whisky character. In Proceedings of 5th Aviemore Conference on malting, brewing & distilling. 1998
Ronde I. Malt whisky yearbook 2015. MagDig 2014.
Russell I. Whisky. Elsevier 2003.