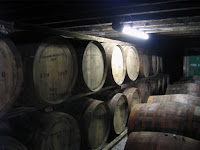 Most whisky casks are made in the USA, where over a million bourbon casks are produced per annum compared to circa 500 000 (mostly wine) casks in France. Estimated 800 000 used American bourbon casks are sold for Scotch whisky industry per year. It is estimated that about 18 million casks at a time are being used in maturation of whisky in Scotland, suggesting that an average lifespan of one cask is typically 20 years, including the possible refills and rejuvenations.
Cooperage oak is usually harvested at an approximate height of 20-30m, diameter of 35-60cm and age of 60-250 years, according to the species, soil and climate. Fast growing Q.alba and Q.robur are harvested usually at the age of 80-120 years, but Q.petraea grown in dense forests (as in central France) might need up to 250 years. Harvesting time and the age of wood influence the composition of wood. It is believed that wood harvested during winter develops less "green wood"-notes and is easier to cooper due to greater amount of tyloses forming in the spring wood and the astringent tannins diminsh as the tree ages.

The oak used in coopering is cut in quarters to prevent the staves from warping, cracking and leaking. Quartered staves are approximately 25% more waterproof than tangentially sawed staves. 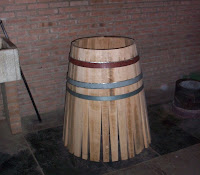 American oaks, especially Q.alba, tend to grow straight and with only a few branches making the coopering easier. High concentration of tyloses and the relative absence of knots allows machinery to be used in cooperages more than in Europe and the staves are often quartered by sawing instead of cleaving in American cooperages. Cleaving is more labour intensive and timeconsuming, but it produces tighter casks and might also affect the permeability of some flavor components. Some Portuguese coopers also use sawing, especially when coopering coarse-grained Q.robur or Q.alba, but usually Q.petraea is cleaved. 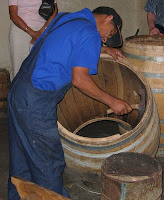 After quartering the staves must be dried to ease the coopering and to prevent cracking, shrinking and leaking. The traditional method is to season the staves in columns in oper air for 1-3years, but since the 1800s kiln-drying in 40-60C for about three weeks has been used too, especially in the USA. The French prefer to season their staves much longer, up to 20 years, especially the staves used in maturation of quality cognac or armagnac. The method used to dry the staves does affect the properties of the cask, reducing tannins and adding some flavours from the local microbes.
Seasoned staves are heated and constructed into a cask. A typical whisky barrel consists usually of 31 staves (8 for the heads) and a hogshead of a couple of more. Heating helps to bend the wood and seasons the inside of the cask. American coopers usually use hot steam in bending and a gas burner to char the inside of the cask. Charring is fast; light char is achieved in 15 seconds, medium char in 30s and heavy char in 45s. Further charring results in alligator/grade4 char with blistering burned wood. Europeans commonly use burning wood chips in bending and toasting. Toasting is slower, generally 15 minutes of firing produces light, 30 minutes medium and 45 minutes heavy toasting, although there are variations between cooperages and coopers. Usually the inside of the cask reaches 100-200C in toasting and over 250C in charring. Caramellisation of sugars in hemicellulose and lignin and to some extent in cellulose begins at about 140C. 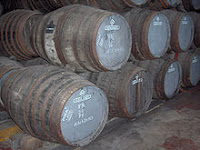 Charred casks are usually rinsed with water and used to fill bourbon. Toasted casks are usually treated with saltwater, coarse wine, burning sulphur or ammonia and steam to kill potentially harmful bacteria (especially Brettanomyces). Filling the cask with liquid also removes loose wooden chips or sawdust and helps spotting the possible leaks in the cask. In the Jerez region it was customary to ferment the must in new barrels to remove excess resin and tannins from the cask and to produce a furry deposit on the inside of cask, probably consisting of fermenting yeast and bacteria, which was believed to improve the cask. After 1960's most big sherry producers have used stainless steel tanks for fermentations. 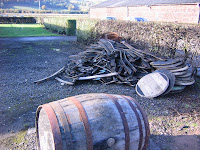 Rejuvenation of casks is used in Scotch whisky industry. It usually consists of scraping the inside of the staves about 5-10mm deep, recharring the cask and in some companies seasoning it with sherry or must. This brings new active wood into contact with the spirit and allows the use of cask for refills. Scraping the staves too much increases the risk of leaking or cracking, but on he other hand if the scraping is too thin, the cask may not be active enough. The influence of spirit reaches up to 20mm through the wood. Usually casks are rejuvenated after three fillings, although some companies are rumoured to rechar casks after each filling. There are considerable differences between a fresh cask and a rejuvenated cask as some flavour compounds are extracted faster and deeper from the wood than others in previous fills. Recent innovation in rejuvenation has been a treatment of cask with salt water before recharring or retoasting, which improves the extraction of color and flavour from refill casks.