Yeast is a crucial element in all alcohol production. It converts sugars to alcohol and CO2 and its metabolism also produces a variety of flavour compounds. Yeast has been used in distilling probably from the beginning, although its importance was not fully appreciated until the late 19th century. Early distillers used beer yeast, wine lees and sometimes fruits or juices to improve fermentation and at least some re-use of distilling yeast has been done in the 1700s. In the process more alcohol tolerant and temperature resistant yest strains have been evolved and/or selected. Some distillers (and some wine makers) in the continental Europe used fermentation sticks, for example branches of hazel, which were used to stir the wort. In the process the stick was covered with yeast and acted as an inoculator for the next batch. During the 1700s the Scottish distillers sold considerable amounts of excess yeast from the fermentations to bakers, but also bought ale yeast from breweries.


In the 1823 Excise Act the distillers were given substantial reductions on taxes to persuade them to apply for a legal licence. At the same time the yeast trade was handed over to brewers as the law was (at least interpreted) to prohibit the distillers to remove any excess yeast during fermentation. As the wort destined for distilling was not traditionally boiled, its contamination with bacteriae and wild yeasts was inevitable and therefore the yeast slurry at the end of the fermentation was not very healthy or pure and  the re-use of distilling yeast was not popular. Porter yeast was preferred by many distillers, because it tolerated high gravity worts and temperature fluctuations and was believed to produce heavier style of spirit and better alcohol yields. Propagating yeast for several batches from starters acquired from the breweries was probably the method of choice for many distillers and the starter was replaced with fresh brewers' yeast as it contaminated or lost viability.

In the continental Europe distillers collected their excess yeast in the process and in 1847 the Vienna Process (or Mautner process) was invented to produce great amounts of yeast from corn based fermentations. Basically this was done with acidic, high gravity-high temperature brewing and top-cropping the excess yeast with nets. The yeast was further processed by partial drying with nets and starch, which improved the stability and eased the transportation. 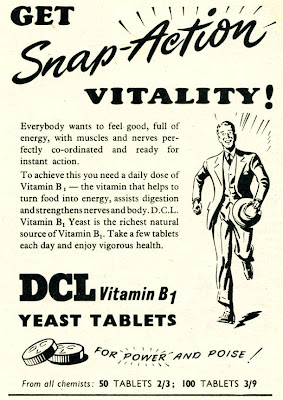 As the yeast production of UK brewers was not sufficient for the increased bakery industry and the distillers were not allowed to sell their yeast, the British yeast industry became controlled by the Germans, French, Dutch and Belgians. Brewers' yeast produced bitter bread, because of hops, contaminant bacteriae and the properties of the yeast strains used,  and therefore imported yeast was preferred in bakeries. There were various methods to remove the bitterness from the ale yeast, but they increased the cost of manufacturing, which was already much more than in the big grain distilleries. The UK Distillers used mostly domestic porter or ale yeast, although some bakers' yeast and imported yeast was also used, especially during the summer breaks of the breweries. In 1860 distillers were allowed to collect yeast of a total amount of 2,5% of the volume of wash and in 1880 this was increased to 10%, probably to diminish the role of "German yeast monopoly". Dr William S. Squire patented his efficient yeast manufacturing process in the UK and offered rights to the Distillers Company Limited (DCL) in 1881. Experimental yeast manufacturing started first in Cameron Bridge and Kirkliston grain distilleries during 1882 and in 1885 a larger scale industrial production was started in Cameron Bridge. Alfred Barnard described The Cameron Bridge Yeast House in 1887:

"Near the works, and standing in a small park, is a handsome building which we at first took for a church, but on enquiry we learned that it was the Yeast House, erected by the Company for the manufacture of French yeast, a large quantity of which finds its way to Glasgow and London, where its fine quality is much appreciated, and yields a large revenue."

The grain distillery Glenochil (DCL) did also produce yeast at the time of Barnard's visit (although probably not yet by the Squire's method): "The Company manufacture an enormous quantity of what is called German Yeast, considered superior to that manufactured on the Continent, and which commands a good price in the market."

In the Cambus distillery (DCL) there were plans to start yeast production: "Alongside the Water-wheel House entrance, across the lade, is a large building fitted up with machinery for making German Yeast, where about two tons can be produced weekly, but at that time of our visit this department was silent."

Bo'ness in Linlithgow owned by J.Calder & Co.  operated according to their own methods imported from Germany and were more open about their process than the DCL: "Under the principal Tun Room is the patent Yeast House, where a large an remunerative business is carried on. Here the yeast from the fermenting backs is collected into three tanks. Afterwards these yeast skimmings are pumped into accordion shaped iron press- a German patent- containing twelve leaves or intersections, which are covered inside with linen cloth of various textures, forming separate divisions, through which the yeast is driven y great pressure. The dough-like material, which exudes from the last intersection, is then collected and passed through a fine sieve, whilst the liquid expressed or squeezed therefrom runs into tank. The yeast material left in the sieve, which looks like flour cakes, is afterwards weighed out in 7, 14, and 28 lbs, and pressed into conical bags and shipped off to England and Germany."

The  DCL yeast business was not fully engaged or even appreciated in 1887, producing just over 5% of the total profits of DCL, but with its wide distiribution network the DCL gained practically a domestic monopoly over the yeast in the 1890s and the foreign imports declined from 14,2 tons to 6,5 tons in 1887-1901 and stopped completely before the WW I. In 1894 production was started in Carsebridge and Glenochil. DCL made good profits in the yeast trade (up to 35% of total profits in 1894-1895) and the trade partly helped it through the Pattison crisis at  the turn of the century. In 1922 DCL had acquired all the yeast producing grain distilleries and controlled the yeast industry as German imports were down after the war.

The role of yeast in fermentation was surprisingly poorly understood until the late 1800s. Fermentation was believed to occur chemically, in another words sugars and water would turn into alcohol and CO2 in the presence of sufficient heat and air; yeast was considered as a byproduct. The Theory and Practice of Brewing by Michael Comburne (1762) describes fermentation as follows:

"The sensible internal motion of the particles of a mixture, by the continuance of this motion particles are gradually removed from their former situation, and after some visible separation, joined together in a different order and arrangement so as to constitute a newcompound...vegetable fermentation is the act of which oils and earth,naturally tenacious, by the interposition of salts and heat, are so much attenuated and divided, as to be made invisible with, and to be suspended in, an homogeneous pellucid fluid...the acid particles of the air, which insinuate temselves into the wort, act on the oils, and excite a motion and effervescence, which is the cause of the heat. As the internal motion goes on, the particles of the wort become more pungent and spiritous, become more fine and active: some of the more volatile ones fly off, hence the dangerous vapour called gas. The pressure of external air, from the very first of its fermenting, not only occasions the particles of wort to arrange themselves in their due order, but also by the weight and action of that element, grinds and reduces them into smaller parts. That this operation persists even after the liquor becomes fine is evident, for every fretting is a continuance of fermentation. It would seem that the more minutely the parts are reduced, the more pungency will appear, and the easier their passage be in the human frame. Lastly, in the final state of all, the active particles being entirely evaporated, a pellicle forms on the surface, seeds deposit from the air, and a moss grows." "Yeast is needed to excite the separation and new arrangement on which the perfection of the products depends, and prevent the accidents to be apprehended from worts' disposition to ferment spontaneously through slow absorbtion of air from the atmosphere." "Yeast provides bladders of the coarser oils of wort, filled with air and ready to start the motion."

A French scientist Antoine Lavoisier described the fermentation process quite accurately in 1789 as "grape must=>carbonic acid+alcohol" and in 1815 the yield of alcohol from sugar was estimated almost precisely by Joseph Gay-Lussac. Many scientists (Christian Erxleben 1815 was probably the first) of the early 19th century proposed that yeast was a living organism and that fermentation was "of some vegetal or animal origin" and as the microscopes improved, three scientists described yeast cells almost simultaneously but independently (Cagniard-Latour, Friedrich Kützing and Theodor Schwann, 1837). Schwann wrote that


"wine fermentation must be a decomposition that occurs when sugar-fungus uses sugar and nitrogenous substances for growth, during which, those elements not so used are preferentially converted to alcohol".

This "vitalist" theory of fermentation was strongly opposed by chemists and it was until 1879 when Louis Pasteur confirmed and described the fermentation process by yeasts. Shortly after that in 1883 the first pure yeast culture (a lager yeast Saccharomyces carlsbergesis, later S.uvarum, S.cerevisiae and S.pastorianus) was isolated in the Carlsberg brewery by Emil Christian Hansen. At about the same time truly sterile laboratories and agar plates were introduced which made possible to isolate and transport pure yeast strains.

After these findings, the the era of biotechnology really started and in the 1900s more efficient and pure yeast strains were developed. In the UK the yeast biotechnology was slower to start as breweries were conservative about pure strains and lager brewing. The DCL started to actively to develop a pure yeast strain for (grain) whisky distilling and yeast production in 1911, as they learned that The Berlin Distillers' Association had already developed a successful strain, which they used in all their distilleries. Several cultures were grown and considered, but the first suitable strain was developed not until the mid 1920s. As the whisky industry was declining and the trade of industrial alcohol increased the emphasis was heavily on alcohol yield. More about yeast strains and their influence on brewing and flavours in the following posts...